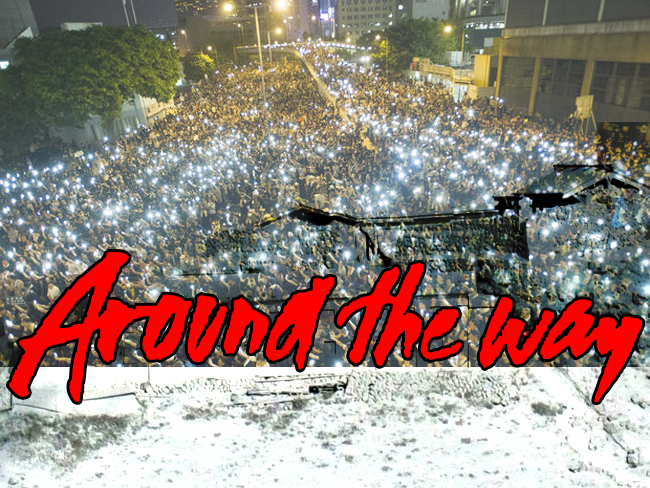 Breaking The Set – The Roots of Hong Kong’s ‘Umbrella Revolution’

31 Intense And Stirring Photos From Inside The Hong Kong Protests – Tens of thousands in Hong Kong have taken to the streets to call for democratic elections. [Buzzfeed]

Why Hong Kong protesters are using Firechat for peer-to-peer communications on their mobiles. [Yahoo]

At 17, Setting Off Protests That Roil Hong Kong. [NY Times]

Hong Kong leader’s daughter creates controversy with Facebook post – The Marie Antoinette of HK Umbrella Revolution? Careful missy before the people bring out the guillotine. [The Times of India]

We Should Be Protesting, Too – Hong Kong and America: two systems, one corruption – By Larry Lessig. [Lessig]

The complicity cost of racial inclusion – Expanding what it means to be white isn’t good news; it only preserves structural privilege. [Aljazeera America]

Why Do Millennials Not Understand Racism? – They think if we ignore skin color, racism will somehow disappear. [Slate]

The Evolution of Flying Lotus. [Noisey]

Is the Fed Private or Public? – It’s a decentralized central bank, inside the government and independent from it. [Slate]

In Defense Of Ms. Hill – It’s finally time to stop letting folks from outside of our community tell us how to feel about Lauryn Hill. [Talib Kweli]

Incredible photographs of The Clash and the Beastie Boys by Josh Cheuse. [It’s Nice That]

What Goes Down in Ferguson is an Asian American Concern – In Fact, It’s a 99% Issue. [Race Files]

Why I Collect Racism – By Frank Wu. [Huffington Post]

Why Empress of China’s closure matters to San Francisco. [Inside Scoop SF]

I’m 25 and My Hair Is Falling Out – By Jackie Nguyen. [Huffington Post]

19 Mind-Blowing Facts About Life In Other Countries. [Buzzfeed]

RBMA Diggin’ In The Carts: Episode 5 – The Role of Role Play

Interview: Final Fantasy’s Nobuo Uematsu – Nobuo Uematsu is the composer responsible for much of the Final Fantasy series. Inspired by his youth in Kōchi – a verdant island in the south of Japan – his work perfectly soundtracked the game’s forests, rivers and castles. In this interview, taken from the sessions conducted for our Diggin’ In The Carts video series, Uematsu talks at length about his beginnings as a composer and the series that made him famous. [RBMA]

LA native Jasper Patterson aka Groundislava, grew up with video game sci-fi sounds and the general aesthetics of the 1980s flourishing around him. Jasper’s father both animated and directed the classic Take On Me video by A-Ha and while Groundislava isn’t merely the next evolutionary step of that era, he takes a similar creative freedom and emotion and injects it into a sound grounded in beats, video games, technology and self-proclaimed “nerdy shit”. As part of the Wedidit Collective, helmed by his old schoolmate Shlohmo, Groundislava represents a group of youngsters; each with their own nonchalantly expert takes on forms of beat and electronic music. Deeply infatuated with house music and minimal techno, Groundislava takes old templates of 8 bit and chip-tune styles and turns them into worlds full of oozing, swirling melodies backed by driving drum beats, heavy bass drops and soaring vocal melodies.

J-Pop: A Video Guide – Having covered the weird world of Japanese pop music for years in print and for anime-themed sites like Japanator, music journalist Zac Bentz highlights 12 essential groups for those ready to delve into the world of life-size Barbies, miniature robot poodles and holographic icons. [RBMA]

Malcolm Young’s Family Confirms AC/DC Guitarist’s Dementia – The illness has forced the guitarist to leave the band permanently. His nephew, Stevie Young, will fill in for him on the band’s world tour in 2015. [Rolling Stone]

Dinos Chapman is the “David Lynch of the Dancefloor”. [Thump]

Underworld was a stadium-filling dance act a generation before EDM. [Thump]

DJ Hype was present at the birth of rave, and has survived 21 years of partying. [Thump]

How rural raving made me the man I am today. [Thump]

“Rashad’s Death Has Brought Everyone Together”: A Rare Interview With Mike Paradinas. [Thump]

Lee “Scratch” Perry is the world’s most badass 78-year-old. [Thump]

Saba’s westside story is one worth listening to. [Noisey]

Even though Jersey Club is international, it’s still most at home in Newark. [Noisey]

War Has Been Declared in the Jungle Scene! – Jungle/drum & bass producers throwing down in a virtual world clash with an ice bucket challenge viral component (no ice or water involved just “send for” and “call outs”). This is the only kind of war we approve of here at TMG. [Thump]

The LOX “No Selfies”

– “No Selfies” is a new track by “The Lox” about taking pictures of your self or saying things online that’s self-incriminating. The track uses a sample of “Rapper Delight” by Sugar Hill Gang. Warning – There’s a lot fictional guns pulled out in this one. Ahhhaa!

6 things you should know about Janelle Monáe. [Wired]

Don’t call it a comeback: Return of The Lyricist Lounge. [Turnstyle]

Why Denzel Washington may be the last pure movie star. [Variety]

The Forgotten Story Of Classic Hollywood’s First Asian-American Star – Chinese-American actress Anna May Wong was a trailblazer despite the openly racist industry in which she worked.Remembering her story and contemplating how much things have changed. [Buzzfeed]

In ‘Selfie’, John Cho gets an unlikely shot as a romantic lead. [NPR]

Why our movements need #InternetFreedom. [Hyphen]

Q. & A. – Maya Lin on saving the planet through art. [Time Magazine]

Here’s why millions of Americans are binge-watching Korean dramas. [Vox]

The dangerous seduction of the rich boyfriend – CNN’s “This Is Life” with Lisa Ling. [CNN]

Boys Puzzle Through Twists And Turns In ‘Maze Runner’ – NPR’s Wade Goodwyn speaks with young Korean-American actor Ki Hong Lee, who appears in the new film, The Maze Runner, about how he broke into acting, and Asian-Americans in Hollywood. [NPR]

– On a recommendation by Fung Bros I checked out this video by the Lieguys in which they catfish self-promoting rappers who comment on youtube videos by posing as legit record label talent agents. Hilarious!

Fung Bros – Life Of A Sneakerhead 4 w/ A Girl

– Fung Bros explores the differences between Asian Americans and the diaspora in Canada and Australia. Warning – Some of the info is made up for comedy.

– Fung Bros introduces us to the Boiling Crab restaurant. What kind of cuisine do Vietnamese refugees of the war make when they land in Louisiana? The answer is the messy goodness that is Vietnamese Cajun seafood; so be prepared with wet naps to clean up after.

The Death of Adulthood in American Culture [New York Times]