Fight Back for Ferguson. How You Can Take Action. [Phil Yu]

An Open Letter From Ferguson Protestors and Allies [Ferguson Action]

Why Ferguson Should Matter to Asian-Americans [Jack Linshi]

Since the murder of Mike Brown by police on August 9th, Ferguson, Missouri has been the site of intense riots, looting, and clashes with police. In this episode, we share accounts from participants and reflections on the rebellion, as well as an analysis which unpacks the designation of “outside agitators.” Two texts discussing other recent anti-police uprisings appear on the Chopping Block, while supporters of Luke O’Donovan update us on his trial and how to show solidarity. Clara and Alanis share a slew of listener feedback, exploring the origins of the term feminism, correcting some mistakes about the IWW, and getting into a testy debate over the politics of sports. News, prisoner birthdays, Contradictionary terms, and upcoming events round out another packed episode. {August 24th, 2014}

An anti-Black Friday protest marched through San Francisco on Friday night, leading to a number of arrests and smashed store fronts throughout the Mission District.

The march combined protestors from a wide range of causes, such as anti-police brutality, Ferguson and Ayotzinapa, and begun at Embarcadero at around 5p.m..

The protestors walked peacefully down Market Street, and after police blocked their entrance to One Bush Plaza, there were some minor skirmishes and a few arrests. The march continued towards the Mission District, going peacefully for nearly an hour throughout the Mission.

The police then forcibly split the crowd into separate groups at around 9p.m., and started making a large number of arrests at Valencia and 23rd, the majority of which were of seemingly peaceful protestors. There was then several spates of vandalism of Mission store fronts, mainly of large corporations’ windows and doors.

Ferguson: In Defense of Rioting – “The violent protests in Ferguson, Mo., are part of the American experience. Peaceful protesting is a luxury only available to those safely in mainstream culture.” [Darlena Cunha]

Killer Mike: ‘Rap Has Given Me Voice”: NPR– Via NPR

Justice for Alex Nieto – Killed by the SFPD on March 21, 2014 [justice4alexnieto]

Vulgar Vietnamese phrase get past the DMV [Phil Yu]

What it mean to be a San Francisco Townie? [Michelle Konstantinovs] 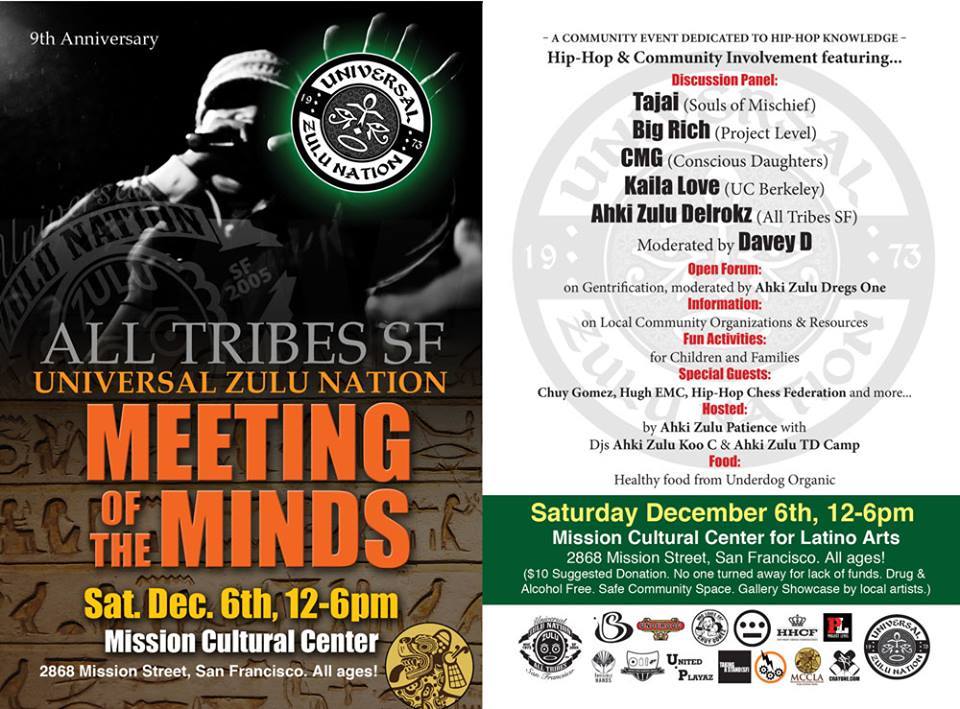 – If you are in the SF Bay Area check out the local All Tribes SF Universal Zulu Nation chapter’s “Meeting Of The Minds” community event at the Mission Cultural Center on Dec 6th 12-6pm. Hip-Hop in action ya’ll! Shout outs to Ahki Zulu Delrokz for spreading the info on this event.

Why the Red Bull Music Academy 2014 in Tokyo is Good For J-music [Patrick St. Michel]

Social Anxiety: How Red Bull Is Changing What It Means To Be An Independent Musician [Emille Friedlander]

A Spin on Frequency: A History of Dance Music Radio in Detroit [Ashley Zlatopolsky]

Few artists working today test the boundaries of human perception quite like Ryoji Ikeda. Famed for his detailed and textural explorations of sound, as well as his large-scale sculptural light installations, the pioneering electronic and visual artist transforms data that permeates our world into works that transcend our everyday imaginings. On the heels of a month-long Times Square takeover, Ikeda brought his much-lauded test pattern series to Japan for the very first time. In the midst of one of Tokyo’s busiest shopping districts in Aoyama, Ikeda’s installation provided a self-enclosed capsule of beautiful, immersive symmetry for five days straight during the 2014 Red Bull Music Academy in Tokyo.

Bishop Nehru on Sway In The Morning

Maino Reacts to Ferguson Decision, Details Arrest for Assault and Talks New Music On Sway In The Morning

– The location of this video is downtown SF, the guys yelling racial things about “Asians” are said to part of a Black Israelite group. Smh they’re playing into the system’s strategy of conquer by dividing. No overstanding here just ignorance #lostones. – DJ Zobe

“Tell all the truth but tell it slant”: A Profile of Mia Yamamoto. [Jean Ho]

From Stuff White People Like to #NotYourShield: How irony is killing activism [Arthur Chu]

Rage Against GamerGate’s Hate Machine: What I Got For Speaking Up [Arthur Chu]

The Many Stories Behind Double-Eyelid Surgery [Kat Chow]

Is Beauty In The Eye(Lid) Of The Beholder? [Kat Chow]

With his traditional Chinese/Japanese patterns, Jimmy Ho, now in his sixties, remains one of the coolest and most forward ­thinking tattooists in Hong Kong.

James Ho, Jimmy’s father, is widely recognized as Hong Kong’s very first local tattoo artist as he started inking foreign sailors as early as 1960s ­ so if anything, Jimmy learnt everything from his old man.

Jimmy opened his first tattoo shop at the age of 14, followed by more than 40 years serving clients including film stars and local gangsters. We visited his shop in Portland Street, Mong Kok, to talk to the veteran about his glorious career and “the golden age of Hong Kong tattoo”, while getting a koi fish tattoo on ourselves.

Along the way we pick apart the digital world’s grip on today’s relationships. Apps and the rise of social media have revolutionized dating, while virtual affairs end real-life romances and online role-playing games have gone X-rated. Finally, we takes a look at a very modern taboo and ask: Can man’s relationship with machine ever translate into real-life intimacy?

Father Federico Loos is a North American priest who moved to Mexico in 1977 to help gangbangers exchange their Glocks for God. VICE Mexico headed over to Huixquilucan, Mexico, to meet the man known as the “Priest of Gangs”—though Father Loos says he’s more accurately the gangs’ great-grandfather.