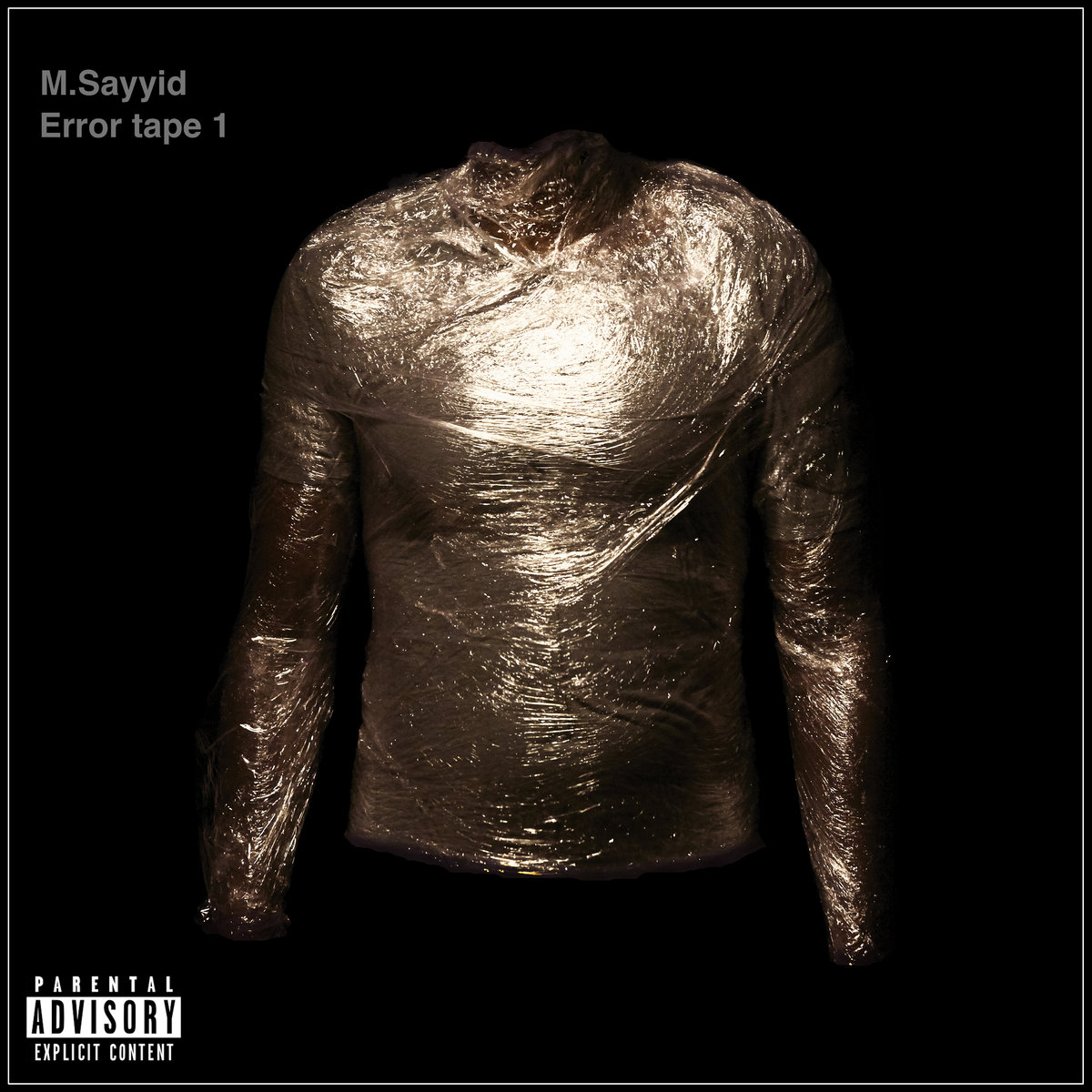 Note: If you’re not familiar with rapper and producer M.Sayyid, please read the previous post I wrote about him, here.

At the beginning of the new century, Y2K was suppose to turn our computers against us. They would be unable to count to the year 2000 and thus go into flicking fits that’d crash planes and fail to alarm 9-to-5ers to start their day. The panic mode of this time was like a script that New York City rap quartet Anti-Pop Consortium was tearing to pieces and reassembling into collages. If artists Basquiat, Andy Warhol, James Rosenquist, and Rammellzee were ever a rap group, Anti-Pop would’ve been their sound. APC member, rapper and producer M.Sayyid would’ve been Rammellzee, the mad buddhist monk of the crew, whose rhymes are collapsing buildings that somehow resemble dancers that succinctly move, clash, and crumble.

I’ve been waiting for an M.Sayyid solo project ever since APC’s Fluorescent Black (2009). Late last year Error Tape 1 surfaced like a glowing disc out of the sea. Among the notable releases that have come out as of late, Tape 1 has been the album that I often revisit. It’s crazy that hardly anyone has reviewed or even mentioned this album. It’s an existential black hole to a heavenly dimension. “On Everything,” the album’s opening track, Judgment Day is climbing “up floors,” out of the bawls of buried torment. Even the clouds are “trembling.” It sounds like Sayyid survived an experience. He was exiled from his body “like it’s purgatory for a nigga.” The track cooks up pressure and abruptly explodes. The listener is pushed into a spiraling free fall. Dramatic church organs fill a cathedral. “Let’s go,” Sayyid says.

One of my favorite moments on this mixtape is on “Result (CX Kidtronix contributes production).” Sayyid invokes channel surfing, but it’s more like quantum leaping, “drop a TV, switch, Horus is creeping, switch, bitches bikinis, switch, riots in D.C., switch, cooking is easy, twitch, shaking completely flip….” I’ve rewinded that section mad times. I think he’s referring to “Horus,” the falcon-headed Egyptian god. Living Pharaohs were considered to be Horus. In death, they became Osiris, god of the underworld. On the album cover, instead of being wrapped in bandages like a Pharaoh and made to live the best parts of his life on a loop, Sayyid’s torso looks like its preserved in cellophane.

From what I gather, he moved to Paris, France in 2013 and spent the next two years adjusting to his new surroundings, not to mention the local terrorist attacks (read an exclusive interview he gave to writer Roy Christopher). Since I’ve been living in Tokyo, Japan for over six years, I’m familiar with the nature of transitioning. You’re forced to rearrange your understanding of the world in relation to who you are, or who you think you are. It brings out your most subtle insecurities. Knowing that rapper and producer Mike Ladd has been living in Paris for years, I imagine that Sayyid linking up with his old homie was a blessing like no other.

Ladd produced “Magic Wand,” a jam that has Sayyid somberly singing, but it’s hopeful, lofty, and naïve, as if he’s morning over a ruptured innocence that can be mended. Sayyid put himself out there. That was the track that made me nod, “ok.” Tape 1’s various collaborators are gradient shades of the albums tonal modes. Jon Saguez’s “Crank Instra” instrumental muses and jabs. “99%” has rapper and singer Haji performing Sayyid’s lyrics and cadences. Her silky vocals twirl through Sayyid’s soundscape, altering from singing to rapping, stretching and contracting syllables. It’s obvious that her and Sayyid are musically related. “We’re Adding Up” featuring Hprizm aka High Priest is an unofficial Airborn Audio track. The beat sounds like somebody’s fist pounding on a piano’s low-end. It’s what happens when you’re “praying in confusion.” They got competitive on this joint. HP slithers out the gate and coils into “let my patterns go like hollow inside of a calico barrel not jamming standing up when others were falling back….” Separating himself from sheeple, he references the Five Percenter theory that 85% of the population are “basic,” %5 are “woke.” The 10% may be our corporate overlords, but these cats keep their fist in the air.

Tape 1 is the return of an artist that bleeds out of the timely framework of what’s considered current. It’s an adventurous collection of sounds that pulse, vibrate and stutter. Sayyid’s swift changing flow patterns maintain their elasticity, but with nuance. As a 40 something year-old rapper and producer, the buoyancy of Sayyid’s performance hasn’t wavered. If anything, he sounds better. His perspective is multi-dimensional and as always, far-reaching. Tape 1 is a reckoning of the past and an affirmation of honest expression. Assuming that there will be an Error Tape 2, hopefully it won’t take long to emerge, but like his APC brothers, Sayyid sticks to his code, “never follow trends,” he says during a performance. For over twenty years dude’s been tinkering at his craft. And he’s still playing on the fringes of experimental music.

Listen to the album below.