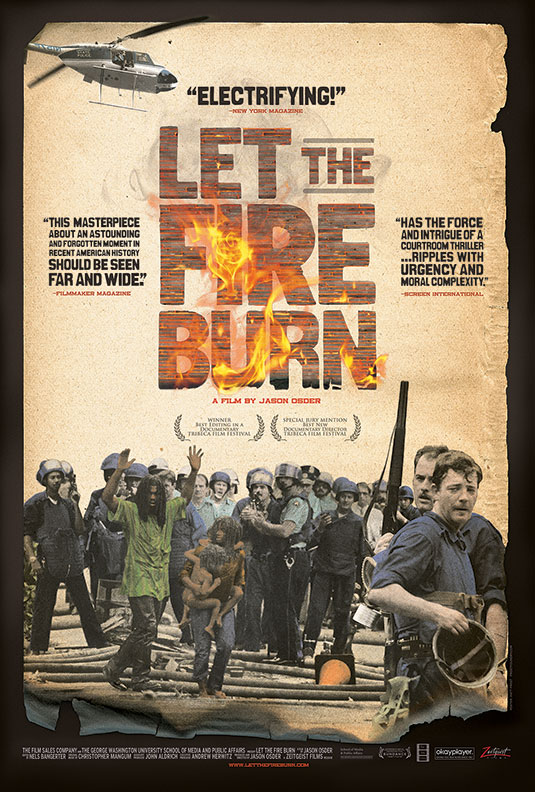 On May 13, 1985, after years of conflict and fighting between the city of Philadelphia and the controversial radical group MOVE, shit hit the fan. The police evacuated the residence surrounding the MOVE headquarters; cut the electricity, surrounded the compound, and a firefight broke out that lasted for hours. Ten thousand rounds of ammunition were fired at the group. MOVE had four guns, but no automatic. Under the direction of local authorities, the police dropped a military-grade explosive on the house. TV news crews caught it on camera, and reporters were live on location as the war-like scene was spinning into untold chaos. Eleven people died in the house, including five children. 61 homes were destroyed. It was later discovered that after the MOVE house caught on fire, the police were instructed by city officials to “let the fire burn.” First-time director Jason Osder uses only archival news footage and interviews to resurrect this remarkably horrific incident. Osder’s Let the Fire Burn documentary focuses on the government versus its citizens, and the visceral, violent and surreal events that took place. Breathe, blink and close your mouth, it’s a dizzying watch.

MOVE is, according to founder John Africa, “not a cult, but an organization.” To be “closer” to “Mother Earth” the group broke up and took away the concrete sidewalk around their house. “I will not hallucinate, fantasize, [or] speculate about my direction and I ain’t going to allow you do so, unless you are asking me to believe that which is believable,” sung by a group of young naked children with dreadlocks. Sue Africa, one of the few white members of the group, explains to a crowd that schools teach separation, categorization and alienation; black, white, blue, green, up, down, left, right. If a child avoids learning categorization, he or she only knows harmony. MOVE-looks crazy as hell. Their rhetoric opposes society’s conditioned understanding of reality:

Jam the system. Hack the matrix. Kill your idols. Create your own culture. Black power is not central; it’s inherent (the original man birthed all walks of life). We are animals. An unorthodox approach to life is radical. The 1776 signing of the U.S. Constitution in Philadelphia solidified a supposed revolution. America broke from a hierarchy to create micro kingdoms that would be ruled under the Federal Government.

Philadelphia Mayor Frank Rizzo fought for the sanctity of 1776, by refusing to let the “minority” disrupt the “majority.” He was a “tough cop” turned mayor. A notorious figure who, according to the New York Times, once told a reporter, “I’m going to make Attila the Hun look like a faggot.” During his term, a four-month-old MOVE baby was mysteriously killed, and it involved several officers that were never investigated. At the end of a 1978 shoot out between MOVE members and the police, Delbert Africa was filmed getting beaten Rodney King-style, but with a swinging steel helmet and kicking boots. At a news conference, Rizzo talked about civil rights leaders fleeing the States to Cuba, “Red China,” and “Africa” and how they’re “anxious” to get back here “because they couldn’t do what they do in this country– in the countries whose doctrine they represent.” Rizzo set the tone for how the city would deal with MOVE, and the cops’ brutal practices didn’t alter, even under the administration of a former community activist and the first black mayor of Philadelphia, Willie Wilson Goode.

This real life story of the MOVE bombing stitched together using all found footage is astounding. Osder created a documentary thriller with so many layers; it’s a Rubik’s cube of social commentary. He tries to tell a balanced story from all parties involved, but this is where MOVE’s presence diminishes. You walk away understanding little about them, other than their bizarre methods of living and their brash tactics to intimidate their neighbors who were caught between MOVE and the government. MOVE remains a mystery, but watching the testimony of two former MOVE members is the telling of a fearful despot determined to bomb their way to law and order. Osder doesn’t establish or remind the viewers that these people are American citizens. Sticking to archival footage, his noble aim may have been to define them as human beings above all. He relies on the viewers’ moral compass to notice when the scale tips and the government starts looking like a mass murderer of its own people.

At the climax, some MOVE members escaped the burning house through a back alley, but they went back in. Only two members survived. There were no cameras or witnesses except the police pointing automatics at the house. MOVE’s neighbors knew that the city, while feuding with the group, didn’t care about what happened to the surrounding houses. The family’s living near the fire lost everything. MOVE may have dominated their neighborhood, but the city’s dysfunctional government burned it down.

This article was originally published in 2014.