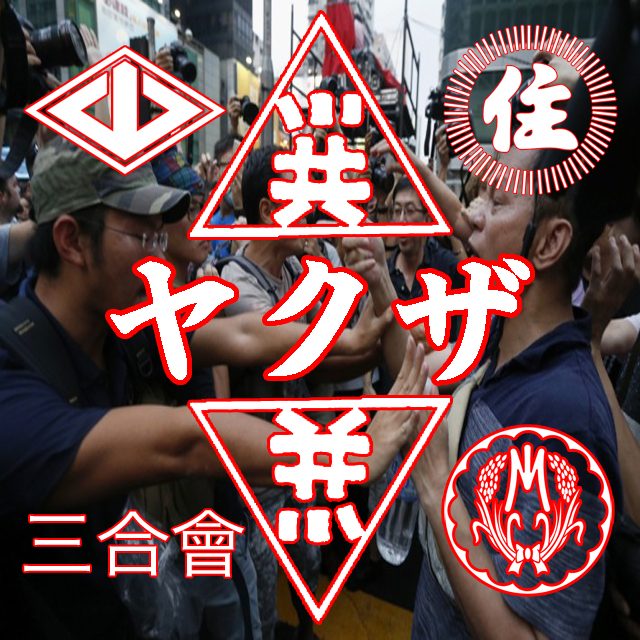 In the ongoing protest in Hong Kong for democratic electoral reform that kicked off on the 26th of September this year, clashes were reported between protestors and suspected HK triad gang members acting as mercenaries for the government.

This is not an uncommon alliance. In times of mass civil unrest the State will sink to the lowest common denominator and hire thugs to do their dirty work of shutting down the voice of the people. These thugs, organized criminal organizations like the Chinese triads or Japanese Yakuza are part of the lumpenproletariat; members of the fringed underclass that can either help or hurt the revolutionary cause.

Vice Japan’s Gokudo series is about the Yakuza and their connection with the ultra-right wing Japanese nationalist movement. This is a good expose on how organized crime (a member of what Marx calls the lumpenproletariat) and how they can often be counter-revolutionary agents supporting capitalism, nationalism, fascism, and ultra-right wing ideals. Marx dismisses the revolutionary potential of the lumpenproletariat, calling them counter-revolutionary forces, saying

The “dangerous class,” [lumpenproletariat] the social scum, that passively rotting mass thrown off by the lowest layers of the old society, may, here and there, be swept into the movement by a proletarian revolution; its conditions of life, however, prepare it far more for the part of a bribed tool of reactionary intrigue.

– Marx from the Communist Manifesto

A modern interpretation of Marx’s sentiment against the lumpenproletariat (in this case organized criminals) is that they are outsiders of the capitalist system, and they appear to rebel against the system, but dig a little deeper into their psyche and you find that they have the same dreams and aspirations of material wealth and gains as a typical capitalist, they just don’t want to play by capitalist rules and regulations of making money. In some ways organized crime and corporations have a lot in common (dare I say they are one in the same), in that corporations appear as law abiding businesses, but behind the scenes they try to cut just as many corners and not follow the rules all in the name of profit.

On the other hand, Black Panther’s Huey P Newton differed from Marx, in that he saw the positive revolutionary potentials of the lumpenproletariats.

“As the ruling circle continue to build their technocracy, more and more of the proletariat will become unemployable, become lumpen, until they have become the popular class, the revolutionary class”.

Russian Anarchist Mikhail Bakunin was also a strong supporter of the revolutionary potential of the lumpenproletariats as a counter narrative to Marx’s dictatorship of the proletariats.

For Bakunin, the revolutionary archetype is found in a peasant milieu (which is presented as having longstanding insurrectionary traditions, as well as a communist archetype in its current social form – the peasant commune)16 and amongst educated unemployed youth, assorted marginals from all classes, brigands, robbers, the impoverished masses, and those on the margins of society who have escaped, been excluded from, or not yet subsumed in the discipline of emerging industrial work “” in short, all those whom Marx sought to include in the category of the lumpenproletariat (cf. Pyziur 1968). Thus, as the people capable of uniting ‘private peasant revolts into one general all-people’s revolt’, Bakunin focuses on

free Cossacks, our innumerable saintly and not so saintly tramps (brodiagi), pilgrims, members of ‘beguny sects, thieves, and brigands “” this whole wide and numerous underground world which from time immemorial has protested against the state and statism.

In the case of the Yakuza or the Chinese triads and other Asian organized crime syndicates, their history has been one of defending a monarch, an emperor, or making attempts at resorting an overthrown dynasty or political regime. The Yakuza, according to their organization’s lore were once samurai until the Meiji restoration ended the Tokugawa Shogunate, essentially disbanding the samurai class, these guys became “Ronin” or a samurai with no feudal master to serve, so they degenerated into the local neighborhood peddlers of vice and loan-sharking. The Yakuza have a history of aiding the government in breaking union labor strikes and interupting leftist movements organizing activities in Japan. Or take a look at the Chinese triad and their origin story of five rouge Shaolin monks who wanted to restore the Buddhist friendly Ming dynasty and over the throw the Qing dynasty by forming the “Heaven and Earth” societies, and their work as mercenaries (the Green Gang 青幫) for the KMT in China’s Civil War between Mao and Chiang Kei-Shek (rumored to be a high ranking triad member), which led to the creation of modern Taiwan, where a lot of politicians there have ties to triads. So one can safely say counter-revolutionary activities is at the heart of these organization.

Franz Fanon in The Wretched of the Earth speaks to this double edginess of the lumpenproletariat.

“The lumpenproletariat, this cohort of starving men, divorced from tribe and clan, constitutes one of the most spontaneously and radically revolutionary forces of a colonized people.”

” Colonialism also finds ample material in the lumpenproletariat for its own machinations. In fact, any national liberation movement should give this lumpenproletariat maximum attention. It will always respond to the call to revolt, but if the insurrection thinks it can afford to ignore it, then this famished underclass will pitch itself into the armed struggle and take part in the conflict, this time on the side of the oppressor. The oppressor, who never misses an opportunity to let the blacks tear at each other’s throats, is only to willing to exploit those characteristic flaws of the lumpenproletariat, namely its lack of political consciousness and ignorance. If this readily available human reserve is not immediately organized by the insurrection, it will join the colonialist troops as mercenaries.”