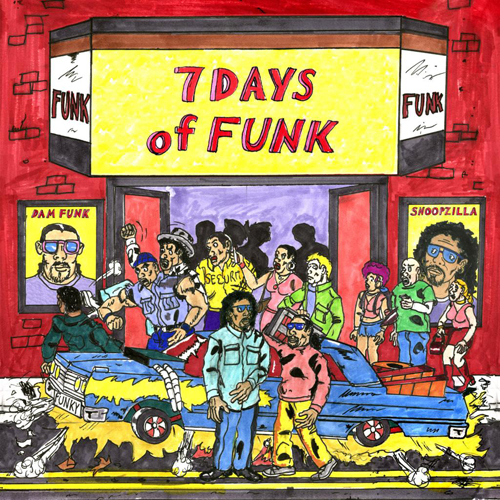 I first heard of Dâm-Funk a few years ago, around the time he had “Burgundy City” single (2008) and later Toeachizown (2009) out. My first reaction to the music was “This is some funky music that touches your soul!” and my next thought was “I can see a rapper like… Snoop Dogg rhyme over these beats!” My fantasy came true when I saw an online video clip of an event HVW8 Gallery/Adidas “Dogg House” art show in 2011, where Dâm-Funk and Snoop Dogg met and performed for the first time publicly. Yes! It was magical, the meeting of two creative minds. Flash forward to fall 2013, they released a self titled project together as a the duo 7 Days of Funk on the independent label Stones Throw. On this project, Snoop yet again adds another alter ego, nom de plume to his list, Snoopzilla.

On 7 Days of Funk, Dâm-Funk brings to the table what he calls “Modern Funk” which is reminiscent of P-Funk, G-Funk and his own style of late 70’s and 80’s electronic influenced funk (Boogie/New Wave/Dayton & Minneapolis Sound), which is then matched perfectly with Snoop’s G-Funk delivery of rapping and singing. This project would be Snoop’s first time since his 1993 debut album Doggystyle (Dr. Dre produced) where he works with one producer for a whole album. For Dâm-Funk this project is a stepping stone in his ambassadorship of funk music, to spread the funk to new ears. 7 Days of Funk is for the true Funkster out there, as well as those who grew up to West Coast rap/G- Funk, and new listeners as well. Below are some music videos, performance clips, talks, and interviews with Snoop and Dâm-Funk about their project 7 Days of Funk.