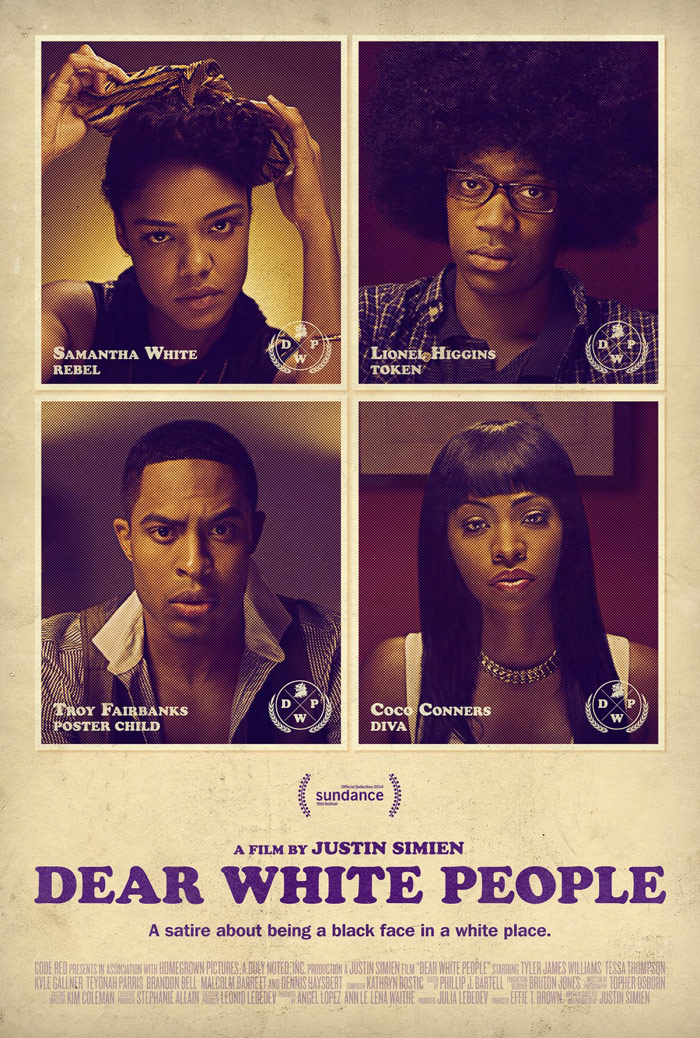 Given this alarming power, the fundamental task of all anti-racist work is to deny this contrived simplicity and undermine it, exposing the unrelenting complexity of the world and refusing to accept anything less, anything simple. There are many ways to oppose racism – after all, it does impact everything – but no matter the anti-racist technique or strategy, the goal is always to re-complicate the world. Thus, the rudimentary starting point for any fight against racism is to not accept its simplified, basic terms.

Dear White People, a movie about racism on a fictional college campus, does not do this. It is basic. Despite its expansive cast and bold ambitions, Dear White People wholeheartedly accepts the readymade conventions of racism. Both the main cast and the secondary characters are developed into overwhelmingly lame, straightforward caricatures. Sam is a biracial black woman struggling between two lovers, one black, the other white (ugh). Troy, a preppy black guy, is a pawn in his black father’s multi-generational conflict with his school’s president, a white man. Coco is an upwardly mobile black woman from the south side of Chicago who wants to rise above her background. Lionel is a gay black man who is ostracized by both the black and white communities on campus.

None of these characters are necessarily predisposed towards flatness. In fact, they are all potentially interesting, especially Lionel (I don’t think I’ve ever seen a movie that cared about the college experiences of gay black dudes), but the film corrals each of them, and the secondary characters that they are connected to, onto either side of a very poorly-conceived racial divide: black vs white. There is nothing wrong with establishing factions and seeing how their ambitions collide, but the factions in Dear White People are never truly embroiled.

Black Steve is a writer based in New York City. This article was originally published on Steve’s blog, The Black Tongue.

The characters each engage in their own racialized skirmish, but their actions are always predetermined by their position on the divide, their race. All the white characters are unrepentant or accidental racists; all of the black characters inevitably affirm their blackness. The only person who doesn’t get any resolution is Sam, but even her struggle is predictable: she is biracial so of course she cannot pick a side. (It was hard not to laugh when Sam decided to move off campus while the other black main characters all stayed at the black dorm)

The inevitability of all the characters’ outcomes and decisions is ultimately self-defeating. The film’s climax, a confrontation at a racist Halloween party, makes this most apparent. The white people are universally offensive and the black people are universally shocked and appalled. The outcome is so unsurprising that its narrative value is completely drained. Seeing the racist party after having already watched over an hour of dry conflict feels like walking around a haunted house with a copy of the floor plan. This isn’t to say that surprise is a necessary element of good filmmaking. Rather, it just felt strange for a movie that traffics in exploring inflexible racial destinies to treat an event it foresaw as something spectacular. It probably would have been more effective to highlight the banality of the party. For instance, I would have been much more horrified if I had seen two white students at the party using “nigger” in a conversation about Tolstoy.

The only particularly interesting thing about the scene is the presence of Asian and Latino students who allied with the black students to shut the party down. Their mere presence hints at more complex race relations on campus. Nevertheless, their presence also highlights their relative absence throughout the rest of the film. They appear only to advance the plot, which is kind of racist. Even within the film, it is not clear why they form this alliance. The film seems to imply that they ally with the black students simply because they are Asian and Latino. It was inevitable, I guess?

All in all, Dear White People is pretty weak. Though it is nice to see a movie that cares about black people and our experiences, mere care is a condescendingly weak threshold for a good movie or for a good perspective on race. Anybody can care, but what marginalized people need is people who care responsibly, intelligently, complexly. There are definitely sides in racial conflict, but they are absolutely not predetermined by race, and to think so is to buy directly into the simplifying logic of racism, no matter which side of the conflict you are on. Dear White People is clearly on the side of anti-racism, but it ultimately fails because it conflates allegiance, disposition, with action, decision. Anti-racism requires more than a sarcastically endearing address – “Dear White People.” More importantly, it requires acknowledging that those people and your relation to them, is much more complex than your sarcasm belies.

Stephen Kearse is a D.C.-based writer who listens to the hearsay, but never says “Hear, hear!” When he’s not writing about rap or race, he’s nose-deep in a history book or a Harper’s magazine, wondering why he’s too lazy to turn on the damn light. He irregularly writes at theblacktongue.net and he irregularly tweets @black__steve. That’s two underscores, bub.