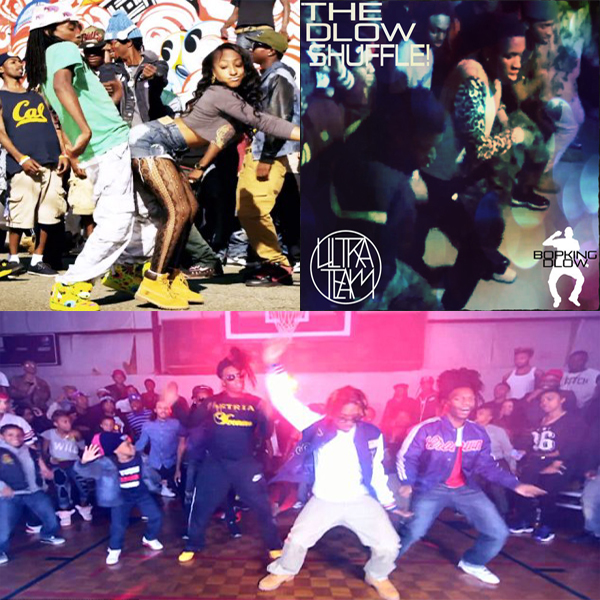 Every generation has it’s own dance craze. In this incomplete list from the old school we have the Charleston, Swing (Lindy Hop, the Jitterbug, Jive, the Boogie-Woogie, Rock ‘n’ Roll), Stepping, Rhumba, Cha Cha, the Twist, the Locomotion, various James Brown moves, the Hustle, the Bump, the Robot, to the more recent, like breakdancing, poppin’, lockin’, Tutting, the Wop, the Cabbage Patch, the Running Man, the Tootsie Roll, the Butterfly, the Harlem Shake, Melbourne Shuffle aka Rave Shuffle, the Charlie Brown, Jacking, Footwork, the Spongebob, Twerkin’, Turfin’, Clownin’, Krumpin’, Soulja Boy’s “Crank Dat” dance, Jerkin’, and the Dougie. The unique thing about now is that dances that would have once been limited to the region or country they originated from due to lack of TV-film-media exposure can virally spread via the Internet and social media all around the world. Highlighted here are three viral dances: The NaeNae (from the group We Are Toonz out of Atlanta), Yiking (San Francisco Bay Area), and the DLow Shuffle (from Dlow of Chicago).

The NaeNae is said to have been inspired by the Martin Lawrence character Sheneneh from the 90’s sitcom Martin. We Are Toonz member CalLamar said “It’s really just based on a ratchet girl in the club dancing kind of funny and the best girl to describe it is Sheneneh from Martin.” [Billboard]

Yiking is a snake like variant of twerkin’ and or part of the larger umbrella of freak dancing from the San Francisco Bay Area. Yiking can be seen as an extension of other SF Bay Area dance movements of the recent past such as Turfin’, Hyphy, Giggin’, Getin’ Low, etc.

Dlow Shuffle was created by dancer-artist Dlow from Chicago. It is a combination of various dance moves, some of the elements coming from boppin’, stepping, the bunny hop, shuffle, stomp, footwork, poppin’ and lockin’.

People 30+ and parents of teenagers may look at these dances, and scoff saying “I don’t get it, it looks so stupid!” Just remember when you were their age and the dances you were doing and how society at large said the very same thing about you. For example the sexually suggestive Yiking – adolescents with raging hormones rubbing up on each other, that’s been happening for as long as humans have been on this planet (for parents this might be a good time to have the sex talk, using protection, contraception and the avoidable burden of being a young parent). Or in the case of the NaeNae – a lot of the videos online have young males doing what appears to be an effeminate dance move. Is the NaeNae a thumbing of the nose at patriarchy and notions of proper straight masculinity? Is the NaeNae doing something similar to the 70’s and 80’s androgynous aesthetics of David Bowie, New Wave, Prince, Grace Jones, and the Glam Hair metal bands? The tamer of the three is the Dlow Shuffle, not risqué but complex as it involves a combination of dance moves. I’d imagine James Brown would approve. Don’t blame the youth, teach, build, and uplift.

With the speed and reach of the Internet via social media, at the time of this writing there could be a dozen other new dances being shared across the globe.

Below are interviews, music videos, tutorials, and performances of these viral dances.

We Are Toonz “Drop The NaeNae” official music video

We Are Toonz on not having overnight success, The NaeNae phenomenon, & performs their new song live on Sway in the morning

We Are Toonz on 106 & Park showing off the NaeNae

Bonus: James Brown shows off various dances (you can still see elements of these dances in many of the dances of today)