The Missed-Adventures of Br’er Rabbit and Br’er Death in the Land of Shadows is the latest solo show from artist Christopher Burch. The exhibition is part of Burch’s continuing series about Br’er Rabbit, a classic American figure birthed by slavery. Held at Aggregate Space, The Missed-Adventures instillation includes found objects, video, drawings and a floor-to-ceiling mural. Burch described it as a “giant graphic novel” that’s “confrontational” and storied. Br’er Rabbit, also known as the trickster, was a clever amoral rabbit that could manipulate situations to his advantage. He wasn’t a savior, a caretaker, or a would be sacrifice for salvation. The trickster could outsmart any animal, no matter how big or small. For American slaves, he symbolized hope and mobility.

Br’er Rabbit’s stories were passed down by word of mouth since it was illegal for blacks to read or write at that time. Towards the end of the U.S. Civil War, he came to represent the American psyche.  He was Abraham Lincoln conning Congress into abolishing slavery not as a moral obligation, but to preserve the Union. He’s Richard Pryor, Marcus Garvey, Charles Manson, Bob Dylan; or the original version of Bugs Bunny tricking Elmer Fudd into sparing his life. Burch, who had been interested in the trickster for years, saw Br’er Rabbit as an archetype of extreme circumstances that are codependent on each other.

Although based in San Francisco, California, he grew up in a lower middle class working black neighborhood in University City, a county of St. Louis, Missouri. He remembers his father telling him and his two brothers stories about The Baby Troll Monster. “He loved to eat little kids that went downstairs after nightfall,” said Burch. His father would go down into their basement to talk to The Baby Troll Monster, while Burch and his brothers sat on the top steps listening, his father “enjoyed scaring the hell out of us.” His vivid imagination possessed a dark humor that kept Burch and his brothers captivated. His father would “change his voice when he spoke as The Baby Troll Monster, and call us out by name when he wanted to really freak us out.” Burch was convinced it was real. He’d sit at the top steps of the basement, glaring into the darkness, waiting to see The Baby Troll Monster. Perhaps the darkness fascinated Burch; a symbolic barrier between the seen and unseen. It could’ve been, perhaps a precursor to his discovering psychoanalyst Carl Jung.

Burch uses Br’er Rabbit to show the existential space between laughter and sorrow, life and death. The trickster, like The Baby Troll Monster, is born out of the darkness, but he’s defined by the light and imprisoned by both. When asked about his art-making process, he described it “as a blind person walking with their hands in front of them, feeling out the contours of their environment. My sight comes from my hands, not the other way around. I spend a lot of time drawing and writing ideas down.” He puts everything down on paper, pulls it apart, reworks it and puts it back together. He’s a draftsman using different mediums to draw, “to wrap light around” the darkness. The whispering greys in between the extremes play to Burch’s ability to give his drawings a fragile sensibility. His detailed shading and pencil strokes almost resemble fingerprints.

Currently, Burch is producing Reflective Mythologies, public educational youth art projects in St. Louis, Missouri. One of them was completed in June. He’s also working on the next Br’er Rabbit and Br’er Death episode, Stepping Razors: Chapter 22 Them Bloodletting Blues. The show will be at Hoffman LaChance Gallery on January 17th of next year. Burch is a rare self-possessed talent, with admittedly self-destructive tendencies, but he’s insightfully conflicted and bound to his imagination. For him, making art gives purpose to life and meaning to light, in the shadow of death. Making art is not prayer, but balance. With a line from rapper Quelle Chris’s “Addiction Cycles,” Burch ended the interview with “I got many shades…I’m calico cat.” 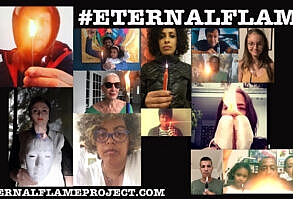