In response to Lou Reed’s recent passing and instead of a beautiful epitaph that you could read here, here and here…below is Mr. Reed reviewing Kanye West’s Yeezus via Talkhouse. The combination of the two couldn’t be more ironic and exact. It’s by far the best review of Yeezus you’ll ever read. R.I.P Lou, you had a hell of a ride. 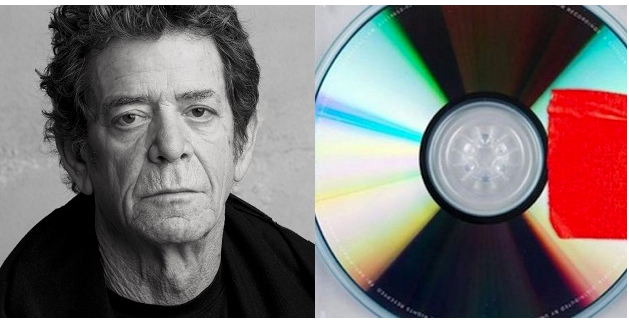 Kanye West is a child of social networking and hip-hop.  And he knows about all kinds of music and popular culture.  The guy has a real wide palette to play with.  That’s all over Yeezus.  There are moments of supreme beauty and greatness on this record, and then some of it is the same old shit.  But the guy really, really, really is talented.  He’s really trying to raise the bar.  No one’s near doing what he’s doing, it’s not even on the same planet.

People say this album is minimal.  And yeah, it’s minimal.  But the parts are maximal.  Take “Blood on the Leaves.” There’s a lot going on there:  horns, piano, bass, drums, electronic effects, all rhythmically matched — towards the end of the track, there’s now twice as much sonic material.  But Kanye stays unmoved while this mountain of sound grows around him.  Such an enormous amount of work went into making this album.  Each track is like making a movie.

Actually, the whole album is like a movie, or a novel — each track segues into the next.  This is not individual tracks sitting on their own island, all alone.

Very often, he’ll have this very monotonous section going and then, suddenly —“BAP! BAP! BAP! BAP!”— he disrupts the whole thing and we’re on to something new that’s absolutely incredible.  That’s architecture, that’s structure — this guy is seriously smart.  He keeps unbalancing you.  He’ll pile on all this sound and then suddenly pull it away, all the way to complete silence, and then there’s a scream or a beautiful melody, right there in your face.  That’s what I call a sucker punch.

He seems to have insinuated in a recent New York Times interview that My Beautiful Dark, Twisted Fantasy was to make up for stupid shit he’d done.  And now, with this album, it’s “Now that you like me, I’m going to make you unlike me.”  It’s a dare.  It’s braggadoccio.  Axl Rose has done that too, lots of people have.  “I Am a God” — I mean, with a song title like that, he’s just begging people to attack him.

But why he starts the album off with that typical synth buzzsaw sound is beyond me, but what a sound it is, all gussied up and processed.  I can’t figure out why he would do that.  It’s like farting.  It’s another dare — I dare you to like this.  Very perverse.

Still, I have never thought of music as a challenge — you always figure, the audience is at least as smart as you are.  You do this because you like it, you think what you’re making is beautiful.  And if you think it’s beautiful, maybe they’ll think it’s beautiful.  When I did Metal Machine Music, New York Times critic John Rockwell said, “This is really challenging.”  I never thought of it like that.  I thought of it like, “Wow, if you like guitars, this is pure guitar, from beginning to end, in all its variations.  And you’re not stuck to one beat.”  That’s what I thought.  Not, “I’m going to challenge you to listen to something I made.”  I don’t think West means that for a second, either.  You make stuff because it’s what you do and you love it.

That explains the jump-cuts that are all over this record.  Over and over, he sets you up so well — something’s just got to happen — and he gives it to you, he hits you with these melodies.  (He claims he doesn’t have those melodic choruses anymore — that’s not true.  That melody the strings play at the end of “Guilt Trip,” it’s so beautiful, it makes me so emotional, it brings tears to my eyes.)  But it’s real fast cutting — boom, you’re in it.  Like at the end of “I Am a God,” anybody else would have been out, but then pow, there’s that coda with Justin Vernon, “Ain’t no way I’m giving up.”  Un-fucking-believable.  It’s fantastic.  Or that very repetitive part in “Send It Up” that goes on five times as long as it should and then it turns into this amazing thing, a sample of Beenie Man’s “Stop Live in a De Pass.”

And it works.  It works because it’s beautiful — you either like it or you don’t — there’s no reason why it’s beautiful.  I don’t know any musician who sits down and thinks about this.  He feels it, and either it moves you too, or it doesn’t, and that’s that.  You can analyze it all you want.

But it’s just ridiculous that people are getting upset about “Put my fist in her like a civil rights sign”?  C’mon, he’s just having fun.  That’s no more serious than if he said he’s going to drop a bomb on the Vatican.  How can you take that seriously?

And then he’ll come out with an amazing line like “We could have been somebody.”  He’s paraphrasing that famous Marlon Brando line from On the Waterfront, “I coulda been a contender. I coulda been somebody, instead of a bum, which is what I am, let’s face it. It was you, Charlie.”  Or he says “I’d rather be a dick than a swallower” — but then he does a whole chorus with Frank Ocean.  What he says and what he does are often two different things.

“Hold My Liquor” is just heartbreaking, and particularly coming from where it’s coming from — listen to that incredibly poignant hook from a tough guy like Chief Keef, wow.  At first, West says “I can hold my liquor” and then he says “I can’t hold my liquor.”  This is classic — classic manic-depressive, going back and forth. Or as the great Delmore Schwartz said, “Being a manic depressive is like having brown hair.”

There are more contradictions on “New Slaves,” where he says “Fuck you and your Hamptons house.”  But God only knows how much he’s spending wherever he is.  He’s trying to have it both ways — he’s the upstart but he’s got it all, so he frowns on it.  Some people might say that makes him complicated, but it’s not really that complicated.  He kind of wants to retain his street cred even though he got so popular.  And I think he thinks people are going to think he’s become one of them — so he’s going to very great lengths to claim that he’s not.  On “New Slaves,” he’s accusing everyone of being materialistic but you know, when guys do something like that, it’s always like, “But we’re the exception.  It’s all those other people, but weknow better.”

“New Slaves” has that line “Y’all throwin’ contracts at me/ You know that niggas can’t read.”  Wow, wow,wow.  That is an amazing thing to put in a lyric.  That’s a serious accusation in the middle of this rant at other people: an accusation of himself.  As if he’s some piece of shit from the street who doesn’t know nothing.  Yeah, right — your mom was a college English professor.

He starts off cool on that track but he winds up yelling at the top of his voice.  I think he maybe had a couple of great lines already written for this song but then when he recorded the vocal, but then he just let loose with it and trusted his instincts.  Because I can’t imagine actually writing down most of these lines.  But that’s just me.

But musically, he nails it beyond belief on”New Slaves.”  It’s mainly just voice and one or two synths, very sparse, and then it suddenly breaks out into this incredible melodic… God knows what.  Frank Ocean sings this soaring part, then it segues into a moody sample of some Hungarian rock band from the ’70s.  It literally gives me goosebumps.  It’s like the visuals at the end of the new Superman movie — just overwhelmingly incredible.  I played it over and over.

Some people ask why he’s screaming on “I Am a God.”  It’s not like a James Brown scream — it’s a real scream of terror.  It makes my hair stand on end.  He knows they could turn on him in two seconds.  By “they” I mean the public, the fickle audience.  He could kill Taylor Swift and it would all be over.

The juxtaposition of vocal tones on “Blood on the Leaves” is incredible — that pitched-up sample of Nina Simone singing “Strange Fruit” doing a call-and-response with Kanye’s very relaxed Autotuned voice.  That is fascinating, aurally, nothing short of spectacular.  And holy shit, it’s so gorgeous rhythmically, where sometimes the vocal parts are matched and sometimes they clash.  He’s so sad in this song.  He’s surrounded by everyone except the one he wants — he had this love ripped away from him, before he even knew it.  “I know there ain’t nothing wrong with me… something strange is happening.”  Well, surprise, surprise — welcome to the real world, Kanye.

It’s fascinating — it’s very poignant, but there’s nothing warm about it, sonically — it’s really electronic, and after a while, his voice and the synth are virtually the same.  But I don’t think that’s a statement about anything — it’s just something he heard, and then he made it so you could hear it too.

At so many points in this album, the music breaks into this melody, and it’s glorious — I mean, glorious.  He has to know that — why else would you do that?  He’s not just banging his head against the wall, but he acts as though he is.  He doesn’t want to seem precious, he wants to keep his cred.

And sometimes it’s like a synth orchestra.  I’ve never heard anything like it — I’ve heard people try to do it but no way, it just comes out tacky.  Kanye is there.  It’s like his video for “Runaway,” with the ballet dancers — it was like, look out, this guy is making connections.  You could bring one into the other — ballet into hip-hop — they’re not actually contradictory, and he knew that, he could see it immediately.  He obviously can hear that all styles are the same, somewhere deep in their heart, there’s a connection.  It’s all the same shit, it’s all music — that’s what makes him great.  If you like sound, listen to what he’s giving you. Majestic and inspiring. 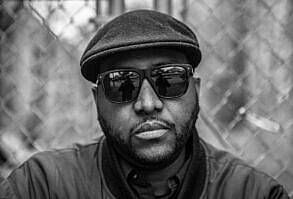 From our last episode of "The Fire This Time" podcast featuring @Yana_Yz Ayana Wyse. http://themicrogiant.com/on-youtube-the-fire-this-time-podcast-episode-6-featuring-ayana-wyse/

"If I let you fool me, then I die. But I've fooled you for a long time. That's why you keep saying, what does the Negro want? It's a summation of your own delusions, the lies you've told yourself. You know exactly what I want!" https://www.esquire.com/news-politics/a23960/james-baldwin-cool-it/