Rhode Island rapper and slam poet Sage Francis is a veteran and long time independent artist. He established his own label Strange Famous Records and hasn’t looked back. If anyone can say that they walked a tight rope into the darkness and lived to tell about it, it’d be this guy. The visual for his single “Blue” is off his mixtape Sick to D(eat)h, released December 12th of last year. In the video, the camera follows a soldier suffering from post traumatic stress disorder while trying to re-adjust back into civilian life.  Sage’s stance on the matter may seem extreme in the face of war as a necessary deterrent to terrorism (at least in America). In the video, the soldier is tormented. He still wants to believe his marriage isn’t over. His damaged psyche is a weapon of self-destruction against everything he cares about. He’s mastered terror, but is helpless against the government’s advances on his son’s future. “Blue” was produced by Reanimator, cuts by Buddy Peace.

Sage is going on a world tour this June in support of his yet to be released official album “Copper Gone.” Check the video below.

The first time I saw him perform or even heard his music was when I was in college (SUNY Purchase, 2002) at Culture Shock. He came to our campus to perform at our end of the year concert. A friend of mine who’s father was a professor at our school was performing dada poetry.

The avant-garde art form was born out of World War I, in response to the hardships and grotesque images of war. At the time, I had only heard about dada linked to surrealism, but I had never heard dada actually performed. When my friend’s pops started spitting he wasn’t standing on stage, but amongst the students, drunken, fun having, arrogant, passionate middle class mostly white kids. They made a circle around him at first. This older white man shouting what sounded like nonsensical words thoughtfully chosen and arranged. He was focused, sweat dripping from his face, eyes bulging out and shrinking inward. Dude was on fire. Kids started shouting random things at him, walking in front of him, making stupid gestures as if to say he’s just a crazy old man. The whole time Sage was standing nearby and he got closer as the crowd grew more antagonizing. Holding what looked looked a cane between his legs, Sage, to paraphrase, told them to “shut the fuck up.” Me and some homies stood transfixed between our friends’ pops performing a cross between an ancient prayer and an extraterrestrial speech and Sage Francis intensely watching him.

Later, Sage performed an intimately confrontational set with the mic chord wrapped around his neck. He made the most self-perceived out-of-the-box onlookers feel uncomfortable. “The flag shop is out of stock/I hang myself while the stock markets crash.” 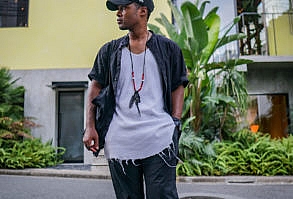